I've loved video games every since the Atari days as a little child. At the age of 30, I continue to play them when I'm not head first into homework. I have being thinking of going into the video game industry with my computer technology degree. I believe when you write about something you enjoy, it can become easier to organize your ideas. Lastly, I would like to continue learning about anything that involves technology and the effect on the world.
Posted by EDean at 4:41 PM No comments:

I'm choosing Henry Jenkins' strategy on my essay about the video game, Mortal Kombat. Since I’m doing a video game, I thought I could best see the game through his knowledge of the industry. He constantly reminds his readers by supplying his thesis throughout every subsection of the piece. This gender divide is has been a major topic for years, and he relates it to old-fashioned stories geared towards boys and stories geared towards girls. He say the boy culture is less restrictive and usually outside in nature. Girl culture is usually restrictive in usually confined to the home to learn domestic activities. I think like most games Mortal Kombat is geared toward a male audience due to blood and violence often seen in school yard fights. I think this game is a way to channel the aggressiveness of young boys. It’s a way to do this without actually physically hurting someone else and takes them to imaginary world. He explains how even though we have advanced to digital media; many of the old accepted norms still apply. He touches on how girls’ games and boys’ games reinforce the gendered roles separating gamers. Jenkins also mentions games targeting boys made them computer literate and the opposite for girls since they stayed away from technology and boy games. With the creation of girl games they are at least able to become computer literate and have an interest in working with technology based careers. I think the computer and video games should target both genders equally allowing them to create their own male or female characters and environments.  With women gamers being 40 of all gamers, the companies are missing the market and millions of dollars. I also think as more women become gamers, more will become game developers closing the gap in the gender divided gaming world.
Posted by EDean at 7:18 PM No comments: 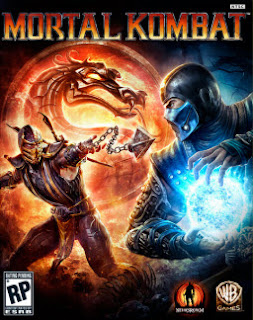 I think I would like to work with the video game called Mortal Kombat. It’s one of most iconic fighting games since 1992. The Mortal Kombat brand has created movies, action figures and many spin-off games of the characters.  The game deals with over the top blood and gore. After you beat your opponent to bloody pulp you can “Finish Them” with a fatality move that puts the final nail in the coffin. Since violence and gore is running rampant more than ever in video games, the company has decided to renew the brand. In April 2010, this version of Mortal Kombat plans to be the “bloodiest ever.” The cast of characters range from street police to immortal gods taking place on earth and other dimensions.
The website is www.themortalkombat.com and you have to at least be 18 years old to just enter the site.  The violence in this game and other games, are sometimes blamed for the violence in youth. With a mature warning, at least only the violence acts would be seen by those who should know right from wrong. Another argument could be that of the audience the game targets which is teen boys and men.  I know there are many female game players but usually fighting games are directed to males.  A third claim could be made that there are very few female character that are in the game or any games. Most of the females are overly enhanced physically and dressed scantily clad. Also, in many fighting games there is a lack of female bosses at the end of the game. Another topic that could be raised is that these games continue to promote violence with repeated play. I think the game appeals to people who enjoy action and fighting games. In addition, I believe this game interest those who enjoy gruesome and bloody games and movies.
Posted by EDean at 7:57 PM No comments:

I want to show the creative side of the ads, while they may be shocking; they are not breaking any laws. While I believe some things like full frontal nudity might be too much in the United States, I also think that society wants to take away a company’s freedom of speech and expression. I believe censorship should be in the adult hands for themselves and children. If you don't like an ad or commercial , turn the page, turn the channel or just don't look at billboards.
Posted by EDean at 11:58 AM No comments:


I think that these ad target young to middle age males and a general adult audience. Again we have some ads that may offend women and the jokes on them. I believe the advertisement use sexual references to sell these delicious food items.﻿
I think the main tactics in the ads are the text, obvious terms that refer to sexual acts.  The huge font sizes are used to draw the attention and add to shock value
Posted by EDean at 9:56 AM No comments:

In this class I would like to learn the correct way to research a paper and how to site the sources for this class and any future papers. Also, I hope the class helps me to critically think through our class and online discussions. It’s been a while since I had an English class, so I would to refresh my memory with the basics and new grammatical issues.
Posted by EDean at 9:17 AM 1 comment: